What are the side-effect of KEROSINE

It has been observed that kerosene combustion yields carbon monoxide (Co) which exacerbates chronic illness like asthma, it causes frequent asthmatic attacks. It has also been associated with recurrent history of branchiolitis (inflammation of bronchioles in the lungs) and also bronchopneumonia (inflammation of lung tissue). Generally, carbon monoxide has been recognized to be a triggering factor for acute respiratory tract infection. LPG thus advised for asthmatic patients in order to reduce number of asthmatic attacks in them. Also, carbon monoxide should be kept far away from children who are most prone to branchiolitis and bronchopneumonia. LPG thus advised for families with children especially those below 5 years of age. 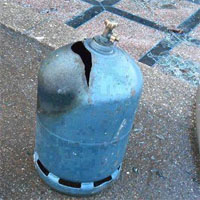 A Family (a man his wife and their baby) who just came back from a dinner out of the house in a restaurant, perceived the smell of gas in the house. The husband upon entering the house turned on the light to see clearly and immediately there was an explosion that killed the man on the spot. The explosion also affected the wife who is currently in the ICU unit. The baby, being far from the explosion was saved. Utensils were found to more than 200 m from the scene of the explosion.
Lesson:
1. When you perceive the smell of gas don't turn on the light by contrast, proceed to open your windows and shutters, gently, so as not to create sparks. 2. Close the bottle of gas. Don't you turn on the light bulbs until you are sure of the dissipation of the smell of gas. 3. Also do not open the fridge or the freezer because it could also create sparks. 4. If you are outside of your house, moisten the key with your saliva before introducing it into the lock.

How to check expiry date of LPG cylinder 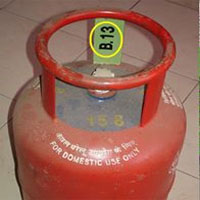 Liquefied Petroleum Gas comes with an expiry date, find out how to check it (Avoid Leakage or Possible explosion at your home (many already died because of this mistake) Petroleum Gas (LPG) cylinder is an essential component of our kitchen, and almost every home owns it. Available easily in the market, the LPG cylinder can be used further by refuelling, but that is not the case always. The LPG we use in our homes comes with an expiry date and many are certainly unaware of it. Using LPG cylinder post its expiry date can result in leakage that can also lead to an explosion. Once the cylinder is past the expiry date, one must stop using it. But most people have no idea how to check the expiry of the bottle. The steps to check the expiry are very simple and basic. Here is how to verify the expiry date of the LPG cylinder- The expiry of LPG Cylinder can be found on one of the metal strips that connect the body of the cylinder to top ring (handle). It is mentioned on the inner side of the strip. The strip has any of the alphabets from A to D painted on it along with a number. Decoding the expiry date is simple. The alphabet represents the month of expiry while the number indicates the year of expiry. A year is divided into four quarters - * A – January to March * B – April to June * C – July to September * D – October to December For example, this cylinder has ‘B 13′ painted on the metal strip. The alphabet B represents month June , and 13 indicates the year 2013. So a cylinder having B 13 mentioned on it means it will or already expire on June 2013. However, there is a limited grace period of three to four months after the expiry as the cylinder cannot be pulled out immediately out of the circulation. There have been reports that distributors tamper with the expiry date as it is written with paint. So next time you receive a cylinder do check the expiry date and stay safe.

Whats LPG and Why Should i Use It